History of the catchment

Eons ago, the Werribee River flowed from the Victorian Uplands at first in a westerly direction, then later after the time of the new volcanics was turned eastwards down onto the Victorian Volcanic Plains, and made its way south-easterly to the sea1. What of the seaward end, where it met Port Phillip Bay, what else is there to tell?Port Phillip Bay had existed as a marine bay prior to the last ice age, and in that time had accumulated sand dunes, ridges and shoals, creating features like the Nepean Peninsula and Point Lonsdale. With the coming of the last ice age, the sea level dropped by around 140 metres, and the bay as we know it now, was a gently sloping plain.2 The channels the river cut now form part of the shipping channels through the Port Phillip heads or entrance. Outside the heads, the Yarra River was joined by the Barwon River and then just above present day Tasmania, the Tamer River joined the Yarra and then flowed into the sea, westward of Tasmania’s Northwest Cape.3

The bay assumed its shape as we know it today about 6,000 years ago, when the sea level rose to its present level.  Between 18000 and 6000 years ago, the sea level rose as a result of melting ice caps, and sea-water flowed into the bay. The shoreline became beaches, cliffs, or flats depending on the lay of the land. Beaches in the Werribee River area were formed from erosion of the new volcanic basalt as it was eroded down into silt and clay with only small amounts of grey or black sand.2

As the earth warmed a period of drier times arrived and the flow from the rivers slowed down, and the heads became blocked with sand. The bay began to dry out as evaporation gained ascendancy, and the water in the bay became more saline and dwindled to form a lake.3

Research by Holdgate and others has indicated that channels of the rivers across the bay floor cease at about the point shown on the accompanying map, where the river met Lake Phillip, the water body remaining between 2800 and 1000 years ago as the bay dried out.4

Then, the bay became flooded again when the sea broke through the sand barriers, which may have happened several times over many thousands of years.5

So the Aboriginal dreamtime story about how Port Phillip Bay was formed can be understood. It is a story in which two boys were playing with toy spears and accidentally upset a magic wooden trough of water, which spilt threatening to drown the people until Bunjil, who created the world, acted to tell the water to go no further.3

So the Werribee River has a story which doesn’t end at Werribee South, and who knows, it may have more to tell in time to come. 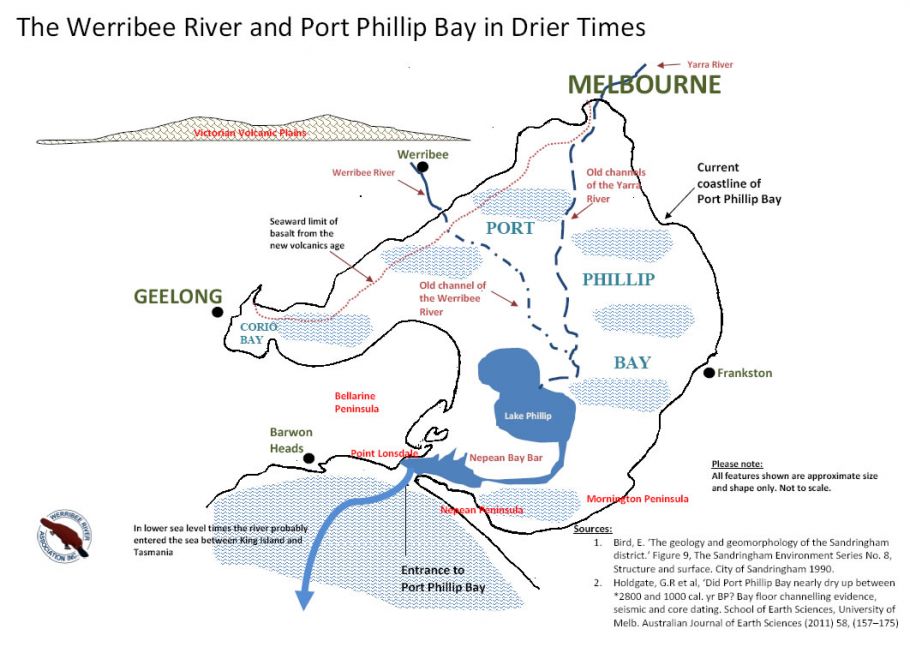